Some people deserve more time than the odd ‘hello, how are you doing?’ whenever you happen to see them, usually every few months or so, or even worse. One such person is the beautiful poet Sheree Mack. And so I asked her to come walking with me. Being out in the hills and dales of ancient Northumbria (northern England and southern Scotland)during my St Cuthbert’s Final Journey project has created a constant pull within me, a pull that tightens and will continue to tighten unless it is respected and realised. Life is so busy that we think we don’t have the time to waste walking in the countryside. Well not anymore. Sheree and I have agreed to do four walks each year; winter, spring, summer and autumn – just us and nobody else.

Today was our winter walk. Up to Rothbury in Northumberland we drove, a cliched sleepy village famous these days for being the place Raoul Moat escaped to before being hunted down and shot by the police (can I say that?). A few hundred years ago of course, Northumberland was quite possibly the most dangerous part of Britain, being the border county that separated warring England and Scotland, and then, after centuries of war savaged it so much, becoming the wild and lawless lands of the Border Reivers. How times have changed hey?

Off we went, past Sharpe’s Folly, built in the 1700’s for an Archdeacon who was interested in astrology, over fields and upwards through dead bracken and marshy grass, disturbing clucking grouse that took off and speared noisily away.

We joked about it being Friday 13th and how we might not make it back down into society again and we chewed the fat about writing and writing projects, about family and what Christmas presents we’d bought for them. But our writing notebooks stayed firmly in our rucksacks. I thought I would write on this walk. I thought I might question Sheree about her writing process, about the inspiration behind her brilliant poetry books ‘Family Album’ and ‘The Properties of Silk’, the latter released just a few days ago as a chapbook for her residency at the Literary and Philosophical Society in Newcastle, later to be made into a full collection. But honestly, I felt no desire to write at all; I just wanted to appreciate Sheree’s company and where we were. 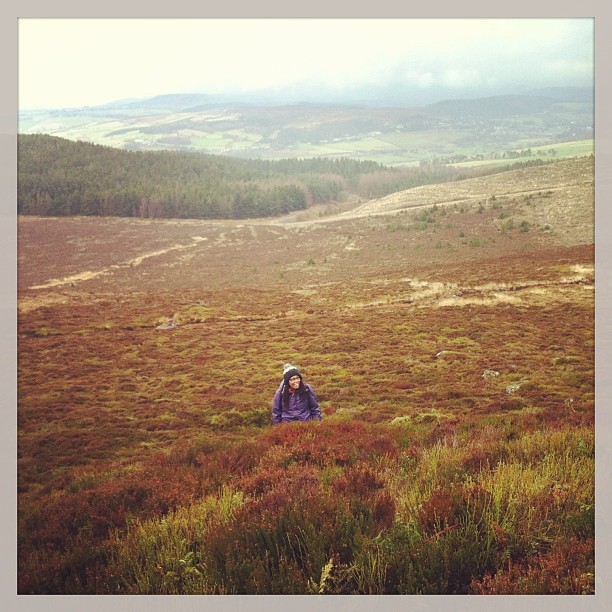 Soon we were up high and though it was warm for December the wind made its presence felt. We wondered about walking in the footsteps of shepherds, of Border Reivers and invading Angles and Vikings. The kingdom of Northumbria was once the largest and most powerful in all England, stretching from Edinburgh down to the Humber River, from the East coast all the way west to the Isle of Man. Up here was its heartland, a day’s ride from its northern capital of Bamburgh.

Up to Dove Crag we went, with its prehistoric burial cairn and rocky crag, and a sight of the sea if the coast was clear, which it wasn’t.

Instead we found a christmas tree, decorated as well, two hours walking high above Rothbury, surreal in swirling cloud. Neolithic stone axes have been found up here, presumably cracked out of the beautiful rocks that stood majestically and reached up to the heavens, that would have provided great hiding places for wild animals, for robbers and raiders, saints and pilgrims, soldiers and shepherds. 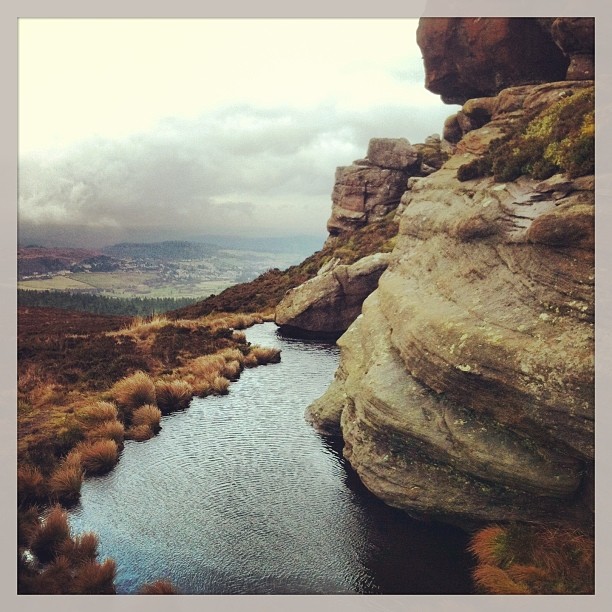 And then it was down again, through the forest, with the wind that rushed through the treetops with the sound of the waves, with its soft path of pine needles and numerous trees that had crashed to the ground in the gale-force winds of a few weeks ago.

And then we were on the flat again, and picking up the pace somewhat, looking up at a sky that hadn’t unleashed heavy rain on us as promised, and wondering how the five hours had gone so fast.

Our next walk is springtime and it can’t come fast enough for me. No more making excuses about not having enough time. Sheree and I both know what it is to be busy, believe me. We rarely stop. But the writing and working can wait on occasion; there’s walking to be done…