They came from across the North Sea, sliding over waves in their graceful longships, outcasts and outlaws from the harsh lands of vast forests and mountain ranges, pushed out by overpopulation and freezing winds to seek new pastures. Perhaps the monks and islanders of Lindisfarne had received word that Vikings were coming once again. Or perhaps the sea was in their favour, giving them time to escape once they’d spotted those dreaded dragonships crashing up and down on roaring mists and foaming spray. They gathered up their most precious belongings and, taking the advice of their hallowed saint, the community of St Cuthbert left their holy island for what was destined to be a seven-year journey that helped shape England and keep alight the flames of Christianity that were in imminent danger of being extinguished.

Only seven monks were allowed to touch the cart that carried their precious belongings on the one-thousand mile journey over the hills and dales of what is now Northern England and Southern Scotland. On the back of the cart was the coffin of St Cuthbert, his body inside, still preserved after his death almost two-hundred years earlier. Alongside him; the Lindisfarne Gospels, one of the most beautiful and important books in world history; the head of St Oswald, the king who brought Christianity to Northumbria, once the most violent kingdom in the land; and the bones of St Aiden, the missionary from Iona who converted Oswald’s people.

They criss-crossed all over ancient Northumbria, a kingdom that had already been dissected by in-fighting and invasion. But this was not blind panic taking hold; far from it. By 875 AD, when the community of St Cuthbert left their vulnerable island home, the Vikings had taken control of much of the landmass right up to York and had permanent military outposts along the Tyne River. This journey of the monks and the community of St Cuthbert was vital in maintaining belief in a victorious future, underpinned by a still fledgling Christianity. St Cuthbert had performed miracles around these hills when he was alive and they brought his body, almost two hundred years later and completely undecayed, a miracle in itself. They made strategic decisions at times, heading towards and right into enemy territory. In Crayke, near York, they staged a bloodless coup, saving the young Dane Guthred from slavery and helping him depose the current Viking leader. This paved the way for negotiations with King Alfred, who was using guerrilla warfare tactics down South and would eventually become known as the first king of the English nation. Eventually, after seven exhausting years, they settled at Chester-le-Street with Guthred’s blessing and were given Wearmouth and Jarrow as properties, where Bede had written the previous century. 113 years later, fears of further attack took the community of St Cuthbert on another much smaller journey, until they finally settled in Durham, where St Cuthbert’s body still lies in the great Norman Cathedral.

Richard W Hardwick, Durham University’s new writer- in-residence, is researching the route and the history around it. And then he’s taking award winning photographer Paul Alexander Knox with him, as they travel the thousand mile route in April 2013. Together, they will record the landscape, describing it today and imagining how it would have been for the monks in the ninth century. They will visit the forty-seven places the community of St Cuthbert took refuge in and, aided by students from Durham University, Richard will write a history of each place from the time of the original journey until the current day. The photography and writing will then be exhibited at The Festival of the North East and also as part of Durham’s Lindisfarne Gospels Exhibition, which celebrates the return of the Lindisfarne Gospels to Durham, from July 2013 to September 2013. Additionally, the writing and photography will be published in a beautiful hardback book, with the aim of turning the route into a national trail that people can walk, cycle and drive. And then, in 2014, the plan is to take the books and photography back around the route for a touring exhibition that will unite the communities that once gave shelter during the ninth century – and help them realise and celebrate what a pivotal role they played in a vital part of England’s history.

Shattered Images and Building Bridges – a collection of Writing and Artwork from three Durham Prisons is the second book to be published by Lapwing Books, the publishing company I created last year to release my own book ‘Andalucia.’

Shattered Images and Building Bridges will be launched to the public at Durham University and Newcastle University on Thursday 26th April and Thursday 3rd May. Please get in touch should you wish to come along. See below for more details of the launches, how to buy a hardback book or receive a free PDF of it instead…

In the last couple of years, I’ve worked as Writer-in-Residence at HMP Durham, have facilitated three creative projects inside HMP Low Newton and have continued my permanent post as Creative Writing tutor at HMP Frankland and as Editor of their prison magazine. Much of that work came from the wonderful and now defunct (thanks to government, arts council and council cuts) Durham City Arts, who placed me in Durham and Low Newton and also gave me the last of their money to design, format and publish Shattered Images, a limited print run of a beautiful and powerfully written hardback book now on sale for only a tenner.

The prisons I worked in are all very different – and their writing reflects that. Durham is a category B local and remand prison, holding more than nine hundred men. Low Newton is a womens prison, holding more than three hundred convicted and remanded women over the age of eighteen. And Frankland is a category A high security prison with more than eight hundred men, all serving a minimum of four years but most serving much much more.

Here’s a piece of writing from the book….

Every window I look out from, I see nothing but razor wire. Coils of it sitting up high above every fence, every wall.

Sometimes ragged pieces of clothing hang flapping in the wind. Pigeons look for food thrown out of windows by inmates, until the crows come and scare them away. The lay of the land, survival of the fittest. Some of the pigeons look sad, some missing a foot, bald patches in their feathers. Who really are the survivors in life, I wonder…

That’s where the saying comes from.

Plenty of bird and bars, not the kind I would like. The saying ‘doing bird,’ ‘doing sparrow,’ relates to birds in cages. Some prisons, lifer jails, allow prisoners to keep budgerigars as pets, companions in their cells. Home Office legislation is now putting a stop to it, as prisoners who own budgerigars cause problems for the prison service when being transferred to other establishments.

A man convicted of murder can show love and care looking after one of God’s small creatures. Even the hardest of men have a heart. It’s just finding it. But prison does not encourage finding the heart. It destroys it. Binds it with coils of razor wire so tight it chokes the meaning of life from it.

One day I hope to see from my window a clear view, not obscured by fences and walls laced with razor wire. Maybe a little knee-high picket fence. Beyond that fields, trees and blue sky. Animals grazing. And hopefully my grandchildren, playing with my son, who will be a man. The pigeons won’t be the scrawny little survivors. They will be big overfed wood pigeons and collared doves. The clothes flapping in the wind will be washing on the line. I will see my wife folding the clothes and putting them in a basket. The smell of fear, hate and desperation will be gone, replaced by certainty, love and happiness. That’s my window; the window locked within my mind. A prisoner, never knowing the day of his release; doing time, doing bird, doing sparrow.

There are nearly ninety thousand prisoners in England and Wales, despite most crime statistics reporting a fall in numbers. We’re locking more people up and we’re locking them up for longer, in some cases much longer. What does all this mean for the prisoner? I wouldn’t consider myself qualified as a spokesman. That’s why it became my mission to publish this book. The pen is a mighty instrument. When your life is curtailed through incarceration, your future blocked by concrete walls, it is natural to turn backwards and ponder, to investigate decisions and actions that led to such a predicament. And it can often be reassuring and warming to gather up some of those good memories too. 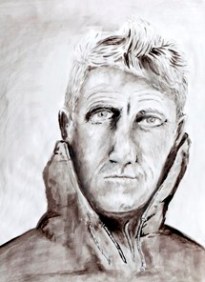 Here’s another piece of writing. The quality of writing in the book is so good and so powerful that I would like to post them all here, but that’s impossible, so I’ve decided to show the variety of the work by giving you a poem, this one remembering the good old days….

Do you remember us riding horseback,

You cupped to me in saddle,

Spindly arms clenched about my waist,

Your brow between my shoulder blades

As I slackened the reigns, quickening the pulse.

Kicked up earth on savannah plains,

Ashanty’s shack with the broken roof,

We entered whole but left unchaste.

And cotton pickers perfect in their song,

Perfect in their limbs,

In the sunset at labour’s end.

Rolled off the misty hills.

We lost ourselves that day,

To our incorrigible wills.

I’ve written beforehand about the therapeutic power of creative writing so I won’t go on about it here. But I’ve seen prisoners come into jail feeling suicidal and I’ve witnessed and helped them come to terms with things by using writing. The arts, always the first to be cut in times of financial mismanagement by governments, are not “soft targets.” For in difficult times the arts work in ways that speak to the self. At the least they take up time and help people learn new skills. At best, they are transforming…

The lauch at Durham University is on Thursday 26th April  at 6pm at the Josephine Butler College. You need your name on the door for that one though, so contact me if you’re interested.

The launch at Newcastle University is a First Thursday Reading, on Thursday 3rd May, at 1pm, in the King George VI building, on the corner of Queen Victoria Road and St Thomas Street. This one’s open to the public so you can just walk in.

For both launches I will be doing a small reading from Kicked Out and Andalucia, and talking about my experiences of working in the criminal justice system – as a social worker in a youth offending team and as a senior project worker in an emergency access homeless hostel, as well as in various prisons. All of the readings, apart from the above two, will come from Shattered Images and Building Bridges.

If you want to buy a copy for ten pounds then please let me know. They are beautifully made and there won’t be any more created when they are all gone. The writing is important and very powerful. You can message me here, e-mail me personally or at richard@lapwingbooks.com. Alternatively, you can order a free PDF by contacting me.